What is a ‘bomb cyclone’?

Posted on January 8, 2018 by WeatherGuys Editor 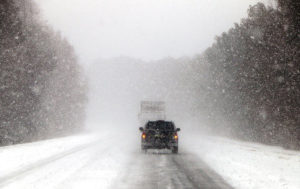 Vehicles move along a snow and ice covered Interstate 26, near Savannah, Ga., Wednesday, Jan. 3, 2018. A brutal winter storm dumped snow in Tallahassee, Fla., on Wednesday for the first time in nearly three decades before slogging up the Atlantic coast and smacking Southern cities such as Savannah and Charleston, South Carolina, with a rare blast of snow and ice. (Photo credit: Robert Ray, Associated Press)

The term “bomb cyclone” refers to the formation and rapid development of a mid-latitude cyclone. A mid-latitude cyclone is a large-scale, low-pressure system, characteristic of the middle latitudes, that has counter-clockwise flow around its center (in the Northern Hemisphere).

A primary measure of development in these storms is a drop in the atmospheric pressure at the center of the storm. Air near the ground is forced to move inward to the center of the circulation — this is known as convergence.

If the barometric pressure of a mid-latitude cyclone falls by at least 1 millibar per hour for 24 hours, the storm is referred to as a “bomb.” A millibar is a unit of pressure that measures the weight of the atmosphere above you. The average sea-level pressure is about 1,010 millibars, so in a bomb cyclone about 2.3 percent of the atmosphere above is removed and moved someplace else.

Meteorologists have used the term ‘bomb cyclone’ for at least 50 years.

They are not rare events, as on average there are about 40 events each year in the Northern Hemisphere. As with any weather event, the number of bomb cyclones varies from year to year.

The recent storm on the East Coast was a bomb cyclone. It is also referred to as a nor’easter – a mid-latitude cyclone that affects the northeastern United States and extreme eastern Canada.

Comments Off on What is a ‘bomb cyclone’?