Is the Fall changing?

Posted on October 23, 2017 by WeatherGuys Editor 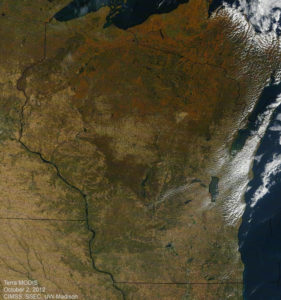 As we enjoyed some of the last really nice autumn weather here in Madison last week, the question arose as to whether the fall has changed in any perceptible way over the past several decades.

We have reported before in this column on the observed trends in the areal extent of lower tropospheric cold air over the Northern Hemisphere since 1948. During the winter months, that areal extent has systematically shrunk over the last 70 years, consistent with a modest but detectable warming of the planet.

A more recent analysis has considered the onset of the winter from the same perspective. We have measured the areal extent of minus 5 degrees Celsius air at about 1 mile above the surface for every September and October since 1948. Adding up each day’s areal extent, we have determined on what day the sum of these values first reaches 1 billion square kilometers.

It turns out that it used to be around Oct. 16 that we first met that criteria in 1970 and that now it is more like Oct. 23 — meaning the fall advances about a week slower today than it did 50 years ago. This year, we will accrue our first billion square kilometers of cold air on Oct. 21 — slightly early compared to the current trend.

Locally, the warm autumn weather is likely to end rather abruptly on Tuesday and we will remain cold for much of next week. The transition to winter is about to begin.

Comments Off on Is the Fall changing?