When is the summer solstice? 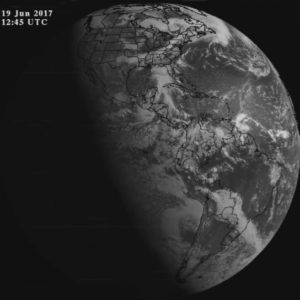 This full disk image, one day before the 2017 summer solstice, illustrates the abundance of daylight in the northern hemisphere.

The summer solstice in the Northern Hemisphere is the day when the sun is farthest north.

As Earth orbits the Sun, its axis of rotation is tilted at an angle of 23.5 degrees from its orbital plane. Because Earth’s axis of spin always points in the same direction — toward the North Star — the orientation of Earth’s axis to the Sun is always changing as Earth orbits around the Sun.

As this orientation changes throughout the year, so does the distribution of sunlight on Earth’s surface at any given latitude. The summer solstice is the day of the year with the most daylight.

On the Northern Hemisphere’s summer solstice, the northern spin axis is tilted toward the sun and latitudes north of the Arctic Circle (66.5 degrees N) have 24 hours of daylight.

At the summer solstice, the sun reaches its highest point in the sky and daylight is longest. However, our earliest sunrise in Madison occurs in mid-June while our latest sunset occurs in late June.

On our solstice, the sun rises and sets farthest north of due east and due west. The farther the sun sets from due west along the horizon, the shallower the angle of the setting sun. That means a longer duration for sunset at the solstices.

Comments Off on When is the summer solstice?