Is Madison breaking any records during the warmest year ever across the globe?

Posted on September 27, 2016 by WeatherGuys Editor 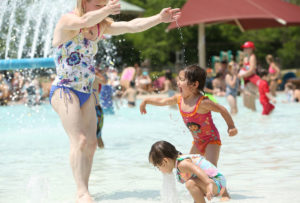 Jennifer Ronquillo, of Madison, plays with her daughters at the Goodman Pool on June 10 — the pool’s opening day, Madison’s first 90-degree day of the year and the third day of a record-shattering 110-day streak of temperatures at or above 70 degrees. (Photo credit: Amber Arnold, State Journal)

Sunday was the 110th consecutive day in Madison with a daily high temperature at or above 70 degrees, shattering the previous longest such streak of 103 days, set in 1998, by seven days.

We are also approaching the record for the number of consecutive days with a daily minimum temperature at or above 45 degrees, set in 2010 when a streak of 128 such days occurred. As of Sunday, this year’s string was at 127. Low temperatures forecast around 45 degrees for Monday through Wednesday could maintain or break that streak.

Though the period of record for minimum temperatures extends back only to 1947, it is conspicuous that 10 of the top 15 such stretches have occurred since 2005. Though such lengthy streaks can result from lucky circumstances — such as a peak of sun on an otherwise cloudy day where the temperature seemed doomed to reach a maximum in the high 60s — it is nonetheless noteworthy that both the streaks have occurred in the warmest year the globe has ever recorded.

Also this past week, the National Snow and Ice Data Center in Boulder, Colorado, reported that the areal extent of the sea ice in the Arctic, which in March of this year recorded its record low maximum extent, was the second lowest on record at the end of the summer (satellite records go back to 1978).

Despite the plethora of local and global data supporting the notion that the earth is warming and that it’s a function of human-induced changes to the chemical composition of the atmosphere, skepticism remains stubbornly widespread. As scientists, we are eager for the debate to become focused on the array of responses society might take in response to the threat rather than continuing to argue over whether or not climate change exists.

Comments Off on Is Madison breaking any records during the warmest year ever across the globe?