Can Pacific hurricanes influence our weather in North America?

Posted on September 19, 2016 by WeatherGuys Editor 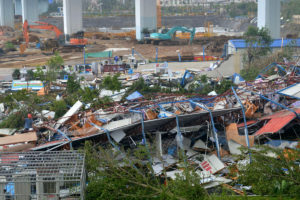 A man earing a red helmet, left, climbs on the wreckage of a destroyed structure after a typhoon in Xiamen in southeastern China’s Fujian province on Thursday. Typhoon Meranti, labeled the strongest storm so far this year by Chinese and Taiwanese weather authorities, made landfall in southeastern China early Thursday after previously affecting Taiwan. (Photo credit: Chinatopix)

Super Typhoon Meranti, the strongest storm of the year, delivered a devastating blow to Taiwan on Tuesday and Wednesday.

The word “typhoon,” used commonly in the west Pacific, is a synonym for “hurricane.” The storm, which intensified from a category 1 to a category 5 hurricane in 24 hours, had estimated sustained winds of 190 mph for nearly a day after reaching that incredible strength.

Though such storms are an annual threat to Taiwan and the neighboring Philippines (a nation that endures more hurricanes each year than any place on Earth), a storm of Meranti’s strength has not made a direct hit on Taiwan since 1959. By the time the storm hit the far southwest tip of the island, the sustained winds had weakened to 115 mph but it still wrought widespread damage to the southern portion of the island.

The storm passed directly over Itbayit in the Philippines so that the small island could be seen in the eye of the storm on satellite images. Meranti subsequently barreled northwestward and made another landfall near Xiamen, China, on Wednesday afternoon with invigorated strength as winds were at an estimated 145 mph, with gusts to 175 mph. As is usually the case with hurricanes, Meranti’s winds weakened after its Chinese landfall, but the storm was still associated with very heavy rains, flashflooding and mudslides.

Though the most intense impacts of the storm are limited to the immediate landfalling areas, the broader atmosphere does respond to the presence of such a powerful hurricane in ways that can eventually affect the weather over North America. The forecast calls for unusual warmth over western Canada at the end of this week that may well have its origin in the interaction of the remnants of Meranti and the jet stream flow over the Pacific Ocean.

Comments Off on Can Pacific hurricanes influence our weather in North America?