What is warm rain?

Posted on August 12, 2019 by WeatherGuys Editor 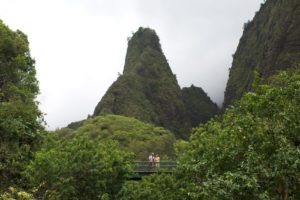 Warm rain is more common in places such as the Iao Needle, west of Wailuku, which is part of a moist, narrow valley in the center of West Maui, than in Madison. (Photo credit: Max Wanger, Hawaii Tourism Authority)

Warm rain results from the joining together of a cloud’s liquid water droplets. For the rain to be warm, temperatures throughout the cloud must be above freezing, so ice particles are absent.

Rainmaking is not easy. A single, small raindrop is a collection of about 1 million cloud droplets. A typical cloud droplet is usually 10 times smaller than the periods in this article.

One process to produce a large drop quickly is to combine many smaller particles. To form rain, the cloud droplets have to bump into each other and merge together through a process called collision and coalescence.

Here’s how the process works. Water droplets of different sizes move at different speeds as gravity and vertical motions within the cloud act on them. The difference in speed increases the chance of collisions, as does any turbulent motions in the cloud.

Almost all precipitation particles that fall in Madison begin as ice particles, even in summer. The frozen particles completely melt, reaching the ground as raindrops, which means that rain is usually cold. In contrast, rain in Hawaii is typically warm rain, as the cloud top temperatures are typically below the freezing level.

Lightning requires frozen ice particles along with liquid droplets. Because most rain in Hawaii is warm rain, you rarely hear thunder in that state.

Comments Off on What is warm rain?