What is a heat wave?

A heat wave is a period of abnormally and uncomfortably hot and usually humid weather. 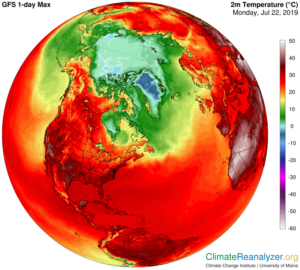 By that definition, Madison — which would have to see 91 degrees for five consecutive days, given its average maximum temperature of 82 — did not have a heat wave last week, though temperatures hit at least 85 for nine days (July 12 through Saturday) and all but two days were 88 or higher.

High humidity and stagnant air reduce the body’s ability to cool down through sweating. Lives are endangered when these conditions persist day and night for several days. Each summer in the United States, approximately 175 to 200 deaths are attributable to heat waves. Most of these deaths occur in cities, particularly northern cities.

Heat waves also have a big economic impact. A prolonged heat wave can cause the widespread use of air conditioning, leading to increased demands for power that stress gas and electric utilities. Transportation can be stymied when highway surfaces and railways buckle and warp in the heat. All types of outdoor work, such as landscaping and construction, experience reduced productivity. Agriculture is especially vulnerable as heat waves stunt crops and can kill livestock.

The National Weather Service issues excessive heat warnings within 12 hours of the onset of extremely dangerous heat conditions. This warning is generally issued when the maximum heat index temperature is expected to be 105 degrees or higher for at least two days and nighttime air temperatures will not drop below 75. Madison’s heat index hit 109 on Friday and 102 on Saturday, with nighttime lows of 78 and 66.

These criteria for issuing a warning vary across the country, especially for northern regions which are not used to hot, humid conditions.

Comments Off on What is a heat wave?