Can we see satellites at night?

Posted on November 5, 2018 by WeatherGuys Editor 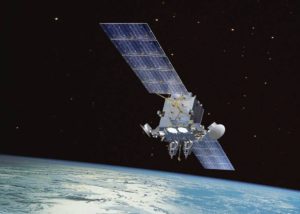 Satellites are visible in the night sky when sunlight reflects off of their solar panels.

Yes, you can see satellites in particular orbits as they pass overhead at night.

Viewing is best away from city lights and in cloud-free skies. The satellite will look like a star steadily moving across the sky for a few minutes. If the lights are blinking, you probably are seeing a plane, not a satellite.

Satellites do not have their own lights that make them visible. What you will see is sunlight being reflected off the satellite, often off the large solar arrays that provide power to the satellites.

These satellites are very high above Earth, about 200 to 300 miles, so while you are in the darkness of night, the sun can still shine on the satellite. Eventually the satellite will fly into the Earth’s shadow and then it will suddenly disappear from view.

The International Space Station (ISS) can be very bright. It orbits Earth at an altitude of about 215 miles traveling at a speed of 17,200 mph. It is a large object with large, highly reflective solar panels making it the brightest of human objects orbiting Earth. It can be as bright as Venus.

You can find out when the ISS is flying over you by visiting this web site, go.madison.com/peqjy, and entering your state and city, or selecting one of the near-by cities from a list.

Weather satellites that track clouds and whose images are shown in animations on many websites are orbiting 22,000 miles above us and appear fixed over the equator. You will not be able to see those moving across the sky.

Comments Off on Can we see satellites at night?