Posted on October 22, 2018 by WeatherGuys Editor

In a recent television interview, President Trump made the claim that climate scientists who conclude that climate change is a result of human influence on the atmosphere have a “very big political agenda.”

The president went on to state, in reference to the rapid melting of ice in Greenland, that “you don’t know whether or not that would have happened with or without man. You don’t know.” 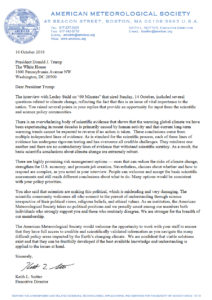 The American Meteorological Society (AMS), the nation’s leading scientific society in the field, politely but unequivocally pushed back on his assertion.

Drawing upon its official position on climate change, issued in 2012, AMS Executive Director Keith Seitter reiterated the society’s consensus view that “the dominant cause of the rapid change in climate of the past half-century is human-induced increases in the amount of atmospheric greenhouse gases.”

He went on to express the society’s desire to contribute to our nation’s response to this looming threat, the urgency of which was heightened by a United Nations report issued Oct. 8th.

“The American Meteorological Society stands ready to provide assistance in connecting executive branch staff with that knowledge and expertise to ensure that you and your staff are working with credible and scientifically validated information as you navigate the many difficult policy areas impacted by the Earth’s changing climate,” Seitter told the White House.

Comments Off on Is climate change caused by human activity?