How fast do raindrops fall? 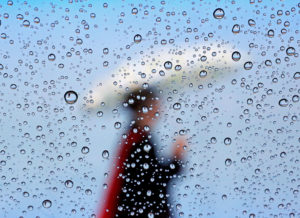 The typical speed of a falling raindrop depends on the size of the drop. A large raindrop, about the size of a house fly, has terminal fall speeds of about 20 mph. (Photo Credit: John Hart, State Journal Archives)

Gravity pulls everything downward. As an object falls, it experiences a frictional drag that counters the downward force of gravity.

While cartoonists typically draw raindrops in a teardrop or pear shape, raindrops are not shaped in those forms. They are drawn as teardrops to give the image of falling through the atmosphere, which they do.

As the raindrops fall they are flattened and shaped like a hamburger bun by the drag forces of the air they are falling through. Raindrops are at least 0.5 millimeters (or 0.02 inches) in diameter.

You will not find a raindrop any bigger than about one-quarter of an inch in diameter; larger than that, the drop will break apart into smaller drops because of air resistance. Precipitation drops smaller than 0.02 inches in diameter are collectively called drizzle, which is often associated with stratus clouds.

The terminal velocity of cloud droplets, which are typically about 10 microns in radius or 0.0004 inches, is about 1 centimeter per second, or about 0.02 miles per hour. Tiny cloud droplets can stay in the atmosphere because there is upward moving air that overcomes the force of gravity and keeps them suspended in the cloud. Only a very gentle upward movement of air is required to keep them afloat.

Raindrops are larger. A large raindrop, about one-quarter of an inch across or about the size of a house fly, has terminal fall speeds of about 10 meters per second or about 20 mph. That kind of speed can cause compaction and erosion of the soil by the force of impact.

Comments Off on How fast do raindrops fall?