When does fall begin?

Posted on September 18, 2017 by WeatherGuys Editor 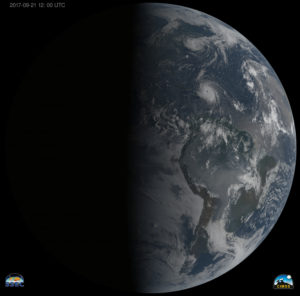 Even the least observant person has probably recognized by now that the days are growing shorter.

In fact, on Friday at 3:02 p.m., we will reach the autumnal equinox and the night will be as long as the day for the first time since late March.

At the North Pole, the situation is more dire, as Saturday morning will be the first of 182 straight days during which the Sun will not rise there! As each day goes by, the portion of the polar regions that gets no sunlight continues to expand until late December. Thus, larger and larger areas of the high latitudes have continual night over the next 3 months.

This circumstance drives the production of increasingly extensive cold air masses near the surface which gradually begin to spread southward as the season progresses.

In North America, the cold air production during this period can be enhanced if early season snow falls over wide areas of northwestern Canada because air over a snow-covered surface can get colder overnight than air over a bare surface.

So, how cold the fall and early winter will be in Madison can be strongly connected not only to when the snow begins to fall to our far northwest but also how much actually falls.

Keep an eye on northwest Canada!

Comments Off on When does fall begin?