Do Major League games get canceled due to snow?

Posted on April 3, 2017 by WeatherGuys Editor 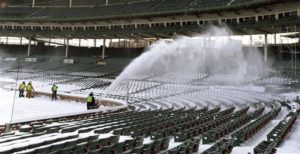 In this country, Opening Day of the Major League Baseball season is more likely to be considered the start of spring than the vernal equinox that precedes it by two weeks each year.

However, as committed baseball fans surely know, the start of the season does not mandate the start of the warm season. In fact, though no definitive record of the total number of Major League games postponed by snow exists, quite a number of opening weeks have experienced widespread disruption as a result of early season snow. Most recently, opening weeks in 2007 and 2013 were plagued by numerous cancellations across both leagues.

One of the more colorful examples of snow in the early season occurred in 1907 when the Philadelphia Phillies traveled to New York’s Polo Grounds to begin the season against the hometown Giants.

Opening Day was the day after a major snowstorm, and groundskeepers had been forced to shovel large drifts of snow onto the outer edges of the field. After seeing their team fall behind 3-0, disgruntled Giants fans began throwing snowballs onto the field. These first volleys quickly became a full-fledged snowball fight. Before long, home plate umpire Bill Klem was struck in the head by a snowball and immediately called a forfeit in favor of the Phillies.

The threat of snow during the opening week of the season seems minimal this year, though it is almost certain a few cold days and nights will greet the first few weeks of the season in Milwaukee as easterly winds off Lake Michigan can be bone-chilling right through late May.

Comments Off on Do Major League games get canceled due to snow?