What was Madison’s coldest day?

Posted on January 30, 2017 by WeatherGuys Editor 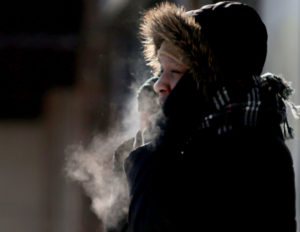 Nika Porter, of Madison, contends with some of the coldest temperatures of the year on Jan. 7, 2015, but they didn’t come close to the city’s record low of minus 37 degrees on the morning of Jan. 30, 1951. (Photo credit: John Hart, State Journal)

Today is the 66th anniversary of the coldest day in Madison’s history.

On Jan. 30, 1951, the temperature in the city reached a morning low of minus 37 degrees. That is far below any temperature we have experienced in the city in the last 25 or more years.

A perfect combination of meteorological events have to conspire to get the temperature that low in southern Wisconsin.

One necessary ingredient is a relatively fresh snow cover, which does two jobs simultaneously.

First, the snow insulates the surface, thus preventing the vast amount of energy that is contained in the ground from radiating upward and helping to warm the air.

Second, snow is an excellent emitter of infrared energy and so, over the course of a long winter night, it is able to emit a huge amount of energy upward, thus cooling the air just above the snow surface to very low temperatures. This radiative cooling is greatly enhanced if the sky is perfectly clear and the air very dry.

To get as low as it did on Tuesday, Jan. 30, 1951, the air had to be even colder at its origin in central or northern Canada.

That means that the same conditions of snow cover and clear skies would have had to exist, unbroken, along a very great distance from Canada into Madison.

In that way, as the cold air headed southward toward us, it was not modified (warmed) very much.

Though it is not a guarantee, of course, it seems unlikely that this all-time record will be broken in the near future.

Comments Off on What was Madison’s coldest day?