Is this a rainy summer?

Posted on August 29, 2016 by WeatherGuys Editor 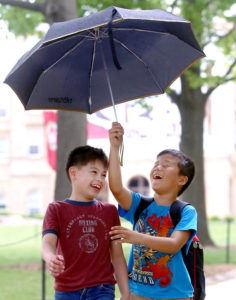 For southern Wisconsin, this has been a rainy summer.

This August, the precipitation that fell over southern Wisconsin is about 200 percent of normal.

Total precipitation was also above normal for June and July. With the summer coming to a close, we are about 6 inches above normal.

On Aug. 19, 2.74 inches fell on Madison, setting a daily record, beating the old mark of 2.13 inches set in 2007. In particular, August has been exceptionally rainy compared to the prior five Augusts, as the only above-normal August in that stretch occurred in 2014 (plus-1.14 inches).

In Madison, the official measurement is made at the Dane County Airport. Even given the convective nature of the storm systems, all of Wisconsin was above normal in terms of the average precipitation for the month of June.

Because of the good rain, there is no area in Wisconsin that currently is classified as experiencing a drought condition. The soil moisture content for most of southern Wisconsin is above normal. The water levels in Lake Mendota and Lake Monona are above their average maximum summer levels.

The convective nature of summertime precipitation makes the amounts vary widely across the county and even across the city. So it is important to make as many observations of rainfall as possible. If you are interested in contributing observations, you can join the Community Collaborative Rain, Hail and Snow networks, or CoCoRaHS. This community includes over 15,000 volunteers who help measure and report precipitation type and amounts every day.

Observations of precipitation by a large group of volunteers are critical to understanding storms as precipitation varies widely from place to place even in a single storm. Such observations are useful for assessing flooding hazards. You can join CoCoRaHS at www.cocorahs.org.

Comments Off on Is this a rainy summer?