When was the year without a summer? 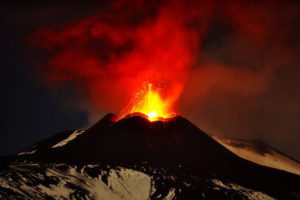 The summer of 1816 is known as the year without a summer in eastern North America.

After the early June cold spell, farmers replanted as temperatures returned to normal. Another cold spell hit in July with freezing temperatures. Frost was also observed in August.

Weather in Europe and other regions of the globe was also abnormal as unusually cold and wet weather contributed to failed harvests.

The cold summer is attributed to large volcanic eruptions. Between 1812 and 1817 there were three major eruptions. The largest was Mt. Tambora, which erupted in Indonesia in April 1815.

The violent eruption pumped large amounts of debris and gases into the stratosphere. It took about a year for material from the eruption to spread globally. This cooled the planet because the tiny sulfuric acid drops reflected energy from the sun back out to space.

Not everything surrounding this event led to bad news. A group of friends vacationing in Switzerland found the cold summer unfavorable for outdoor activities, so they decided to have a ghost story contest. The winner was Mary Shelley and her story was published in 1818 — “Frankenstein.”

Comments Off on When was the year without a summer?