When does the last deep-cold spell of the winter usually come?

Posted on February 15, 2016 by WeatherGuys Editor 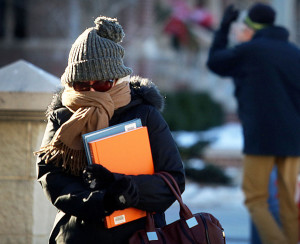 UW-Madison graduate student Marguerite Heckscher bundles against frigid cold temperatures as she makes her way across campus last month. We might not be done with bitter cold for the winter, but we don’t have much longer to go. (Photo credit: John Hart, State Journal)

As we all work to recover from our recent cold spell, the natural question is: Are we done with bitter cold for the winter?

None of this bodes well for our chances this year. It should be noted, however, that in the last 18 years, 50 percent of winters have not had an additional cold spell after Feb. 15.

Recent research at the UW-Madison has documented a systematic warming of the lower troposphere during Northern Hemisphere winter over the past 66 seasons. Elements of that analysis have suggested that the hemisphere begins its warm up much earlier than the spring equinox, which occurs around March 22. In fact, the hemispheric warm up really accelerates in the first few days of March.

Though it is true that this hemispheric signal does not always translate to a warm up at any given location, it is comforting to know that the entire hemisphere is trying to shake off winter as early as the next couple of weeks. So whether or not we have just had our last below-zero night of the season, we really do not have that much further to go.

Comments Off on When does the last deep-cold spell of the winter usually come?