Is our December abnormally warm?

Posted on December 21, 2015 by WeatherGuys Editor 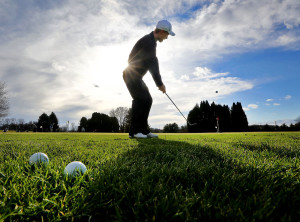 Cooper Armstrong of Madison works on his chipping game on Dec. 9 before a round at Odana Hills golf course, which reopened so golfers could take advantage of this month’s warm temperatures. Photo credit: John Hart, State Journal archives.

The mildness of the first half of December in southern Wisconsin has probably not escaped anyone’s attention.

Despite the first visit of relatively cold air we just experienced over the weekend, both Madison and Milwaukee have already recorded the second warmest first halves of December in their respective records. Through Dec. 16, Madison’s average temperature for the month was 39.7 degrees, a full 14.4 degrees above the average.

How rare is such a warm first half of December? Of the 10 record-warmest such periods in Madison history, five have occurred since 1998 (the record-warmest year). That is a rather alarming observational fact that strongly supports the myriad other observations that document the reality of global warming.

And since we are likely to record above normal temperatures for a majority of the remaining 10 days of this December, it is likely we will end up with one of the warmest Madison Decembers of all time. This follows a warm November where average temperatures in southern Wisconsin were 5-6 degrees above normal.

This warmth will ensure that the freeze of Lake Mendota will be delayed well into January, perhaps long enough that we will make a run at the latest freeze ever, which is Jan. 30. Stay tuned for more updates on what may be taking shape as a strange, record-setting winter.

Comments Off on Is our December abnormally warm?