Can it be too cold to snow?

Posted on November 30, 2015 by WeatherGuys Editor 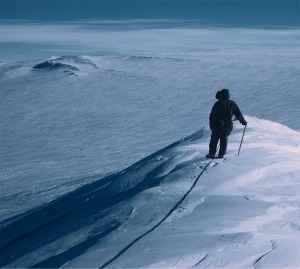 Atop an Antarctic mountain

No, it is never too cold to snow.

It snows in Antarctica — where temperatures are minus 70 degrees — though only a few tenths of an inch.

Snowfall requires vertical motion in the atmosphere, or lifting. Warm moist air above the surface may be lifted by a front. As the air rises it expands and cools because air pressure decreases with altitude.

As the air rises, expands and cools, the relative humidity in the atmosphere increases and eventually cloud particles form. If the air is below freezing they will be ice crystals. As the lifting continues the crystals grow and fall from the cloud, and if they reach the surface, that is snow.

Snowfall can occur at very cold conditions as long as there is some source of moisture and some lifting. Very cold days in Wisconsin often are associated with high-pressure weather systems where downward motions prevail, preventing the formation of clouds and precipitation.

Heavy snowfalls generally occur around 15 degrees or warmer, though still below freezing, since the warmer air generally has more water vapor.

Comments Off on Can it be too cold to snow?