Is water always present in the atmosphere? 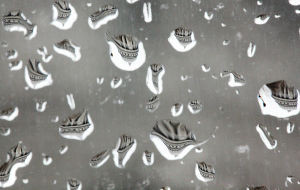 One of the important and microscopic characteristics of the condensation process is that water vapor will not condense into liquid water very easily unless it condenses onto a foreign object such as the tiny hairlike structures on grasses or dust and pollen particles on windshields. In fact, on particularly dewy mornings, if you wait for the dew to evaporate you may find yellow stains on your windshield that are left as the liquid water evaporates leaving the pollen particles on which it originally condensed.

Without these cloud condensation nuclei, the formation of cloud liquid water droplets, and eventually precipitation-sized particles (which are 1 million times more voluminous), would be considerably more difficult in our atmosphere. In that case, rain and snow would be rare, and life on the planet would be put at risk.

Comments Off on Is water always present in the atmosphere?