What is a polar vortex

Posted on November 11, 2019 by WeatherGuys Editor 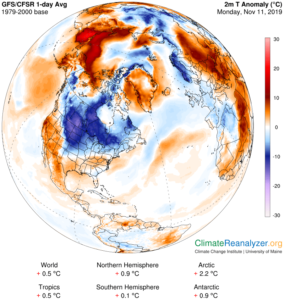 From ClimateReanalyzer.org, provided by the Climate Change Institute at the University of Maine.

The term “polar vortex” was popularized by media outlets in 2014, when the country experienced a brutal January cold snap.

The polar vortex is a band of strong winds, high up in the atmosphere that spins counter-clockwise around the North Pole.

During the summer months, the vortex is weak, and its southern edge sits at high latitude. As the sun sets on the North Pole in late September, the vortex gains strength and gradually edges southward.

At the southern edge of the vortex is the so-called polar jet stream, which separates warm air to its south from the ever expanding and increasingly colder air to its north.

The nature of the polar vortex changes throughout the winter — sometimes it is strongly west-to-east, and other times it is characterized by high amplitude waves, which can rapidly transport warm air toward the North Pole in some locations and frigid air southward in others.

For instance, last week during our cold spell over the central United States, it was balmy in Anchorage, Alaska, which enjoyed highs in the low 40s.

Our recent cold spell has not prompted media to use the term and, as it turns out, that is actually appropriate.

A characteristic aspect of the true wintertime polar vortex is the existence of strong polar night jet — a band of strong west-to-east winds in the lower stratosphere (between 10-15 miles high).

The polar night jet is just beginning to establish itself at this time of year. If pieces of that vortex break off later in the winter and head southward, it is appropriate to refer to the ensuing cold air outbreaks as being related to changes in the polar vortex. But that is not the case in early November.

Comments Off on What is a polar vortex