When is the autumnal equinox?

Posted on September 23, 2019 by WeatherGuys Editor 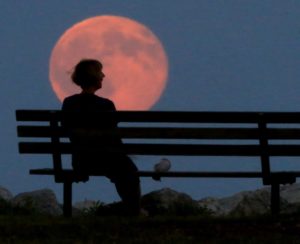 The harvest moon, shown in 2015, isn’t defined by any change in its color, but rather by the time of year it arrives — closest to the autumnal equinox. This year’s autumnal equinox occurred this morning. (Photo credit: John Hart, State Journal)

This morning we officially entered fall as the autumnal equinox occurred at 2:50 a.m.

That means that today, in common with every location on Earth, we will enjoy exactly 12 hours of daylight and 12 hours of night.

On Tuesday, the sun will not appear above the horizon at the Pole and will not come back for six months.

As the days march on, the same fate will gradually overtake other latitudes in the Northern Hemisphere until by Dec. 21, the sun will not rise even at 66.5 degrees north latitude.

The primary means by which air is warmed is by its contact with the surface of the Earth that, when the sun shines, can absorb radiation and heat up.

A leading consequence of the shortening days, especially at high latitudes, is that air masses can begin to get really cold again. Even as we enjoy a rather warm September, the areal extent of the cold wintertime air is growing at high latitudes.

As it encroaches southward from the Pole, the polar jet stream, always on the warm edge of the coldest arctic air, begins to take up residence at lower latitudes bringing with it the powerful storms of late autumn and winter.

So, enjoy the beautiful early fall days we are likely to have this week in Madison because the cosmic deck is stacked against us!

Comments Off on When is the autumnal equinox?