Can we modify hurricanes?

Posted on September 9, 2019 by WeatherGuys Editor 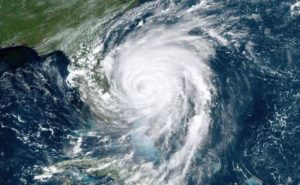 There have been a few theories for how humans might be able to dissipate a hurricane, though they all have downsides. (Photo credit: NOAA)

There have been several suggestions on how humans might modify the intensity or path of a hurricane.

One method suggested was to change the “energy budget” of the environment around the storm. It was suggested that this could be done by dispersing, from aircraft, carbon soot. That soot would absorb solar energy and warm the atmosphere, which would enhance the evaporation of ocean water and promote the formation of thunderstorms.

Those thunderstorms, if they formed in the correct place, could weaken a cyclone’s eye wall. You can imagine why that is not a favorable approach.

For one, the sediment, which would fall out of the atmosphere and onto the ocean quickly, would be messy.

Another is the cost of sending planes out to do this and the amount of carbon needed to affect the environment. How would we be assured that the thunderstorms formed in the correct place? Moreover, even if this was practical, it would only work during the day.

Another approach, first suggested in the late 1950s, was the use of nuclear bombs.

Hurricanes get their energy from evaporation of warm ocean water. Exploding a nuclear bomb in the ocean would bring cooler water to the surface, reducing the fuel for the hurricane. If dropped in the eye of the hurricane, it was theorized that a nuclear explosion could push warm air up and out of the storm’s eye, cooling the storm center and causing it to dissipate.

While nuclear bombs are terribly destructive, the energy in a nuclear bomb pales in comparison to nature’s tropical storms. The heat released by a hurricane is equivalent to a 10-megaton nuclear bomb exploding every 20 minutes. So, nuking a hurricane very likely wouldn’t do much to diminish it, although it might make it radioactive — another downside.

Other methods proposed include using mechanical pumps to bring cooler ocean water to the surface and seeding the storm with silver iodide to accelerate cloud formation and dry out the storm precipitation.

Rather than trying to modify the path or intensity, it is probably wiser to be prepared for its arrival.

Comments Off on Can we modify hurricanes?