Posted on August 26, 2019 by WeatherGuys Editor

Lightning is an atmospheric discharge of electricity that is five times hotter than the surface of the sun. When lightning strikes the ground, it is hot enough to fuse silica sand and clay together into fulgurites: shafts of glass produced by lightning. The word fulgurite comes from fulgur, the Latin word for thunderbolt. 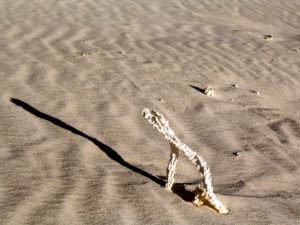 Glass can be made by heating sand, which is mostly silicon dioxide, or quartz. The lightning bolt vaporizes the sand it encounters, generating a hollow tube. As the heat moves outward from the entry hole, the sand grains melt and form a smooth inner surface. As the heat moves further outward, it fuses grains of sand.

The outside is rough, looking like petrified lightning when the fulgurite has branching assemblages. But the inside is hollow and smooth. The composition of the sand determines the color of the fulgurite.

Fulgurites are very fragile, as they are hollow and have lots of air spaces. They can get longer than 10 feet, although most are a few inches. Since they trap air bubbles, old fulgurites can be used to study the composition of air in ancient times. Additionally, the number of fulgurites found along with the date formed can provide information on the frequency of lightning.

The Libyan Desert is pure white sand composed of quartz. Fulgurites have been found in that desert. Also discovered were pieces of fused quartz with the clarity of clear glass. Such a piece adorns the mummified body of Tutankhamen. The piece is estimated to have formed 26 million years ago. To form such a piece of glass requires very hot temperatures, hotter than lightning. The most reasonable theory is that this was formed by a high-energy impact of a meteor.

Comments Off on What is fulgurite?