What is with the hot temperatures in Europe? 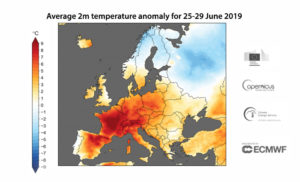 Temperature anomalies across Europe (departures from normal) measured by satellite in late June.

Europe recorded its hottest June ever.

The hottest temperatures occurred June 26-28, resulting from a high-pressure system that settled over Europe combined with hot winds from the Sahara Desert in Africa. France observed temperatures in excess of 113 degrees for the first time since temperatures were recorded.

The global average temperature of June 2019 was the highest measure for the month of June in the 140-year National Oceanic Atmospheric Administration (NOAA) global temperature record. The NOAA measurements also show that the January-June temperature for 2019 is the second-warmest January-June on record.

Europe is on its way to recording one of the hottest Julys on record also. The June heat wave was followed by another heat wave at the end of July. Five countries set new all-time national heat records. The Netherlands, Belgium, United Kingdom, Luxembourg and Germany reached new temperature records of 102.7, 107.2, 100.6, 105.4 and 108.7, respectively. The new records in Belgium and Luxembourg exceeded the old records by more than 5 degrees. Last week Germany, France and Belgium each saw record-breaking temperatures at cities throughout the country, beating record temperatures set in the 1940s.

The hot weather can lead to cancellations or delay of trains, as the heat can cause train tracks to buckle or signals to fail. Hundreds of Eurostar passengers from Brussels to London were stuck for hours in 104-degree heat when their train broke down in a tunnel.

Comments Off on What is with the hot temperatures in Europe?