What is the hurricane forecast for this year? 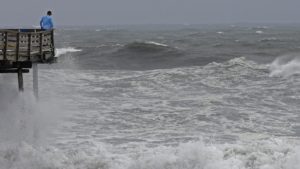 A hurricane is a tropical storm over the Atlantic Ocean basin. The official hurricane season runs from June 1 through Nov. 30.

But that doesn’t mean all hurricanes have to occur during that time period. Indeed, we have already had a hurricane on May 20. That storm is named Andrea. Hurricanes are given names to improve communication between forecasters and the public regarding forecasts.

The National Oceanic and Atmospheric Administration has been making seasonal hurricane forecasts for about the last decade. Their Atlantic Hurricane Season Outlook for this year indicates there is a 70% likelihood of having nine to 15 named storms of which four to eight could become hurricanes, including two to four major hurricanes.

So, if the forecast holds up, we are in for a near-normal hurricane season. NOAA’s Climate Prediction Center will update the seasonal outlook in August just prior to the historical peak of the season.

Comments Off on What is the hurricane forecast for this year?