Has this been an unusually dreary spring? 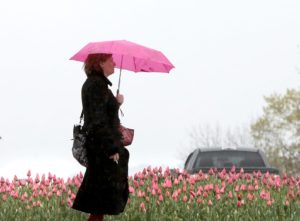 From April 1 to June 13, Madison Wisconsin was 0.46 degrees cooler than  normal and accumulated 1.94 inches above normal precipitation, some falling as snow as late as April 27!
(Photo by J. Hart, State Journal archives)

With astronomical summer set to begin on Friday morning at 10:54 a.m. in Wisconsin, it seems like a good time to consider the nature of this seemingly dreary and cold spring that we have just endured.

Almost no one will disagree that this year has had a memorably bad spring, not only locally but around the nation as widespread flooding has put elements of the agricultural sector well behind their normal schedules.

From April 1 to June 13 we have averaged 0.46 degrees below normal in Madison and we have accumulated 1.94 inches above normal of liquid equivalent precipitation, some of it falling as snow as late as April 27.

In the previous four springs we have had similar experiences only once. Some may recall that last April 1 through June 13 we were 0.36 degrees colder than normal and accumulated nearly 7 inches of snow on April 18. In the prior three years during the same period we averaged 1.94, 0.71 and 2.19 degrees above normal. None of these years was notably warm during the period but these recent records do suggest that this year presents a relatively unusual set of circumstances.

So, though we have been waiting for spring to transition to summer, we had it much worse 22 years ago.

Comments Off on Has this been an unusually dreary spring?