Posted on January 22, 2019 by WeatherGuys Editor 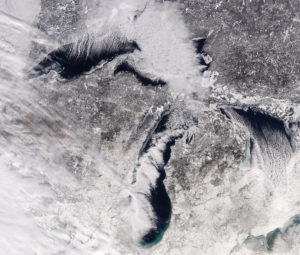 Though we have enjoyed a remarkably warm December and first half of January in Madison this year, we are now entering deep winter.

The period from Dec. 1 through Jan. 17 has averaged 7.4 degrees above normal this year and has contributed to our breaking  or approaching several obscure, but nonetheless, interesting records of prolonged warmth — provided courtesy of Jordan Gerth at the Space Science and Engineering Center at UW-Madison.

We have already broken the previous record for latest date with a low temperature of 10 degrees or colder, set on Jan. 11, 1914.  This year, we made it to Saturday, when the overnight low was zero.

As of Monday, we will likely edge up to the fifth spot in the latest first day (after July 1) for a low temperature below zero.  The all-time latest occurred on March 3, 2002 — nearly a full month later than its nearest competitor.

So, even as you are cursing the cold in the last week of January, remember it has been a remarkably long run of unseasonably warm weather.

Comments Off on Is winter finally here?