What is El Niño and does it affect Wisconsin?

Posted on November 19, 2018 by WeatherGuys Editor 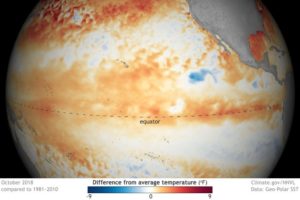 El Niño is a combined atmosphere/ocean circulation anomaly in the tropical Pacific Ocean in which unusually warm surface water extends westward from the coast of Peru into the mid-Pacific. One is predicted to develop this winter, which may impact our winter weather.

The warmer than normal waters support persistent tropical thunderstorms in that same region — where such storms are ordinarily rare.

Because the Earth spins on its axis like a merry-go-round, air near the equator (like the outer edge of the merry-go-round) has higher momentum than air at, say, 30 degrees north latitude.

Thus, if equatorial air can be exported to higher latitudes, large wind speeds can be produced at those latitudes. At the top of the thunderstorms, air with high momentum is exhausted into the upper atmosphere and heads north to alter the position of the jet stream. That alteration of the jet stream position and strength tends to make us warmer in the winter.

So unusually warm waters lead to persistent thunderstorms in the eastern equatorial Pacific that alter the position of the jet stream and contribute to unusual winter weather conditions for us. The downstream impact of the altered jet stream is a winter in Wisconsin with less snowfall than normal.

The forecast challenge for winter conditions is that an El Niño doesn’t guarantee a given snow or temperature pattern; it just makes it likely that we will have a milder winter.

Comments Off on What is El Niño and does it affect Wisconsin?