How accurate was the forecast for Hurricane Michael?

Posted on October 15, 2018 by WeatherGuys Editor 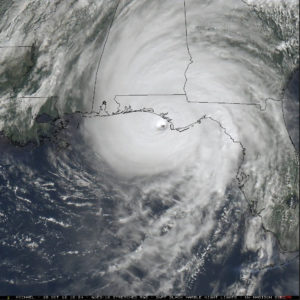 As we all know by now, the storm lashed the coast with winds in the 155-mph range, or strong Category 4 intensity.

In addition to wind speeds, the intensity of hurricanes is also commonly measured by how low the barometric pressure gets at their centers. Michael recorded the fourth-lowest sea-level pressure of all storms that made landfall in U.S. history.

Why was the eventual intensity of Michael so poorly predicted? A component of the answer is that we lack the density of data required to take full advantage of the computer-modeling technology that underlies short-term forecasting.

The models themselves are forced to make numerical approximations to a number of influential physical processes, such as ocean temperatures and heat content, changes in wind direction with altitude, and interactions with land that control intensification of hurricanes.

Specifically for Michael, early forecasts did predict intensification but not at the rate that was actually observed. Early in its life cycle, Michael was in an unfavorable environment for intensification due to wind shear (change in the wind direction with altitude).

Later the storm moved over some very warm water in the Gulf of Mexico and into an atmosphere with less wind shear. As a result, explosive intensification ensued.

Despite the current difficulties, hurricane forecasts are getting better and improvements will continue but intensification will remain difficult to foresee.

The most important lesson from this storm, if you are in a forecast area in which a hurricane is predicted, and are asked to evacuate — you should do so.

Comments Off on How accurate was the forecast for Hurricane Michael?