How is the Arctic sea ice doing?

Posted on October 1, 2018 by WeatherGuys Editor 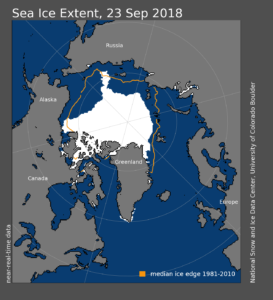 The 12 smallest summertime minimums of Arctic sea ice have all occurred in the past 12 years. (NSIDC graphic)

One of several diagnostic signals of a warming climate is the extent of sea ice in the Arctic, particularly its annual minimum extent which often arrives around the autumnal equinox.

The sea-ice extent is directly measured by satellite data and is available through the NASA-supported National Snow and Ice Data Center at the University of Colorado-Boulder.

This year’s minimum occurred on Sept. 19 and again on Sept. 23 when the sea-ice extent shrunk to 1.77 million square miles — the sixth-lowest summertime minimum in the nearly 40-year satellite record.

The 2018 minimum was 629,000 square miles below the 1981-2010 average, continuing a trend in which a portion of sea-ice the size of Maryland and New Jersey combined has been lost each successive year in these past four decades.

The 12 smallest summertime minimums have all occurred in the past 12 years.

That is yet another unequivocal signal of the gradual warming occurring over the entire globe.

The sea ice is a very important aspect of a positive feedback that can accelerate that warming.

As the ice cover decreases each year at the end of the summer, the amount of open water increases. Open water is much better at absorbing incoming solar radiation than the highly reflective, snow covered ice.

Consequently, refreezing of the water into wintertime pack ice is retarded by the increased absorption of sunshine. That leads to thinner ice on the margins of the ice cap at the end of the winter which makes it easier for melting in the summer to expose even more open water at the end of each successive warm season.

Current research is examining the influence of this systematic reduction of Arctic sea-ice on changes in the autumn/winter atmospheric circulation of the Northern Hemisphere.

Comments Off on How is the Arctic sea ice doing?