Does lightning add nitrogen to the soil?

Posted on July 9, 2018 by WeatherGuys Editor 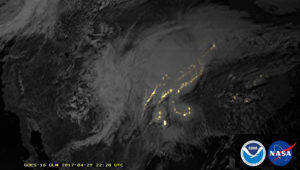 Yes, lightning adds nitrogen to soil, but not directly.

Our bodies need proteins that contain nitrogen. The way our bodies normally get nitrogen is by eating plants or animals that eat plants.

Plants absorb nitrates in the soil and when we eat plants, we get the nitrogen in a form that our bodies can use. Plants also cannot make use of the nitrogen in the atmosphere so fertilizer is one way to add nitrogen to the soil.

Lightning is another natural way. Nitrogen in the atmosphere can be transformed into a plant-usable form, a process called nitrogen fixation, by lightning.

Along with the lightning in the cloud are cloud droplets and raindrops. Nitrogen dioxide dissolves in water, creating nitric acid, which forms nitrates. The nitrates fall to the ground in raindrops and seep into the soil in a form that can be absorbed by plants.

Lightning does add nitrogen to the soil, as nitrates dissolve in precipitation. This helps plants, but microorganisms in the soil do the vast majority of nitrogen fixation.

Steve Ackerman and Jonathan Martin, the ‘Weather Guys’, are professors in the UW-Madison department of Atmospheric and Oceanic Sciences, and guests on WHA radio (970 AM) at 11:45 a.m. the last Monday of each month.

Comments Off on Does lightning add nitrogen to the soil?