Does the U.S. have a new weather satellite?

Posted on March 5, 2018 by WeatherGuys Editor 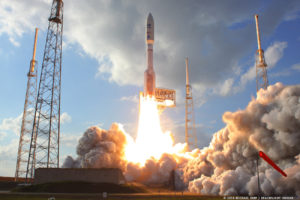 This is the second in a series of four next-generation weather satellites now in orbit 22,300 miles above the Earth. It will reach its final orbit location in approximately two weeks, and will be referred to as GOES-17 (Geostationary Operational Environmental Satellite, number 17).

It will orbit above the western part of North America and will provide faster, more accurate observations for tracking wildfires, fog and storm systems and hazards that threaten the western United States, including Hawaii and Alaska.

Satellite data help forecast the weather in two ways: Expert forecasters interpret the images, and numerical weather-prediction models assimilate observations. Image analysis plays an important role in short-term forecasts, those that predict the weather one to three hours into the future. Numerical weather predictions are more useful in 12-hour to three-day forecasts.

Other nations have just as much interest in observing weather from space as does the U.S. International collaborations organized through the World Meteorological Organization offer a powerful way to understand weather on a global scale.

Comments Off on Does the U.S. have a new weather satellite?