Who is Increase Lapham?

Posted on November 20, 2017 by WeatherGuys Editor 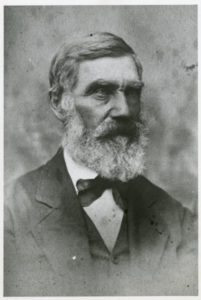 Many consider Increase Lapham to be one of Wisconsin’s greatest scientists.  Though never formally educated, Lapham demonstrated an early talent for topographical sketching and became an engineer and surveyor of canals in the 1830s.

He was born in Palmyra, New York, on March 7, 1811, the fifth of 13 children in a poor Quaker family.  Early in 1836, he was invited to Milwaukee as chief engineer in charge of building the Rock River Canal (which was never built).

Lapham made contributions in many scientific endeavors including cartography, geology, ecosystems science, and Native American history of Wisconsin.  One of his foremost interests was weather and climate.

He sent frequent reports of maritime casualties to Milwaukee’s congressional representative, Gen. Halbert Paine, which eventually prompted Paine to introduce a joint resolution on Feb. 2, 1980, requiring the Secretary of War to “provide for taking meteorological observations at the military stations in the interior of the continent … and for giving notice on the northern lakes (the Great Lakes) … of the approach and force of storms.”

The resolution passed and one week later, President Ulysses S. Grant, who personal experiences during the Civil War had long ago convinced him of the utility of meteorological information for military activities, signed it into law.

On Nov. 1, 1870, the United States Army Signal Service — what would grow to become the National Weather Service — began operations.

On Nov. 8, 1870, Dr. Increase Lapham, who had been the catalyst for the formation of the Signal Service, issued its first official storm warning for the waters of Lake Michigan.

Comments Off on Who is Increase Lapham?