Is the weather in Madison more extreme than other locations in the U.S.? 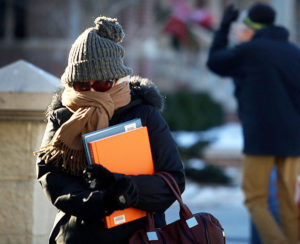 Spend an entire year in Madison, and you’ll likely experience a huge swing in temperatures and humidity, thanks to the area’s continental climate. (Photo credit: John Hart, State Journal archives)

Sitting nearly in the middle of the vast North American continent, Madison has what is known as a continental climate. Continental climates are characterized by large annual extremes in temperature and humidity as well as very distinct seasons.

The continental nature of Madison’s climate is what makes a year’s worth of weather in Madison usually a lot more varied than a year’s worth in, say, Seattle.

There is an astounding 144-degree difference between the all-time highest temperature in Madison (107 degrees on July 13, 1936) and the all-time lowest (37 below zero on Jan. 31, 1951). In addition, the amount of water vapor in the air can range from the barely detectable level in the midst of a deep winter cold spell to as much as 3.5 percent of every breath you take during a severe July heat wave.

No matter what the season, the vast majority of the invisible water vapor in the atmosphere is contained in the lowest mile or two from its source at the surface.

At any given time, the Earth’s atmosphere contains 37.5 million billion gallons of water vapor – enough to cover the entire surface of the planet with 1 inch of rain if condensed. This amount is recycled, through evaporation powered by the sun, 40 times each year in what is known as the hydrologic cycle.

In each of these 40 cycles, enough energy is expended to power the United States – the largest consumer of energy in the world – for 3,441 years, a truly astounding amount of energy.

Comments Off on Is the weather in Madison more extreme than other locations in the U.S.?