When does tornado season start? 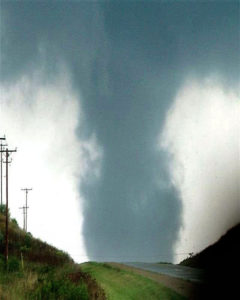 The tornado that struck Stoughton on August 18, 2005, is seen southwest of Highway 51 as it approached the city.  (Photo credit: Dale Bernstein, NOAA/NWS)

Wisconsin has had tornadoes in every month of the year except February. We can have tornadoes almost anytime, although the chances of having one in winter are pretty small.

June is the month with the largest number of tornadoes in Wisconsin, with 95 percent of tornadoes occurring between the months of April and September.

We typically define the tornado season for a particular area as the time of year when tornado occurrence there is at its peak. Tornado season peaks in March and April in the Southeast but not until late June or early July in the Upper Midwest. For the entire U.S., May is the month with the greatest number of tornadoes.

For a tornado to occur there must be the right ingredients coming together in a particular place. Severe weather requires warm, moist air near the ground and a change in wind speed and direction, or wind shear, with height above the surface. Since springtime is when the lower atmosphere is warming up, that’s when we start hearing about tornadoes. This continues through summer.

So far, 2017 has seen an active tornado season for the nation. As of the weekend, the U.S. has seen 413 tornadoes that have led to 27 deaths. On average, Wisconsin averages 19 tornadoes a year. There have been 1,537 documented tornadoes in Wisconsin since 1884, although sightings prior to 1950 are very incomplete, as many in rural areas were not reported.

While any tornado should be considered life threatening, most tornadoes that occur in Wisconsin are considered weak, with wind speeds less than 110 mph.

Comments Off on When does tornado season start?