Is carbon dioxide a major contributor to global warming? 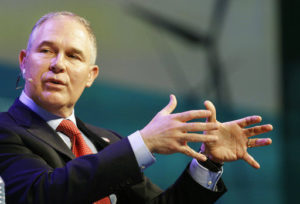 EPA Administrator Scott Pruitt, who recently stated on CNBC that he does not believe that carbon dioxide is a primary contributor to global warming, putting him at odds with scientific consensus and his own agency. (Photo credit: Melissa Phillip, Houston Chronicle)

The Earth’s atmosphere is a mixture of many different gases. Several of these gases are known as “greenhouse gases” because they share the characteristic of being excellent absorbers of infra-red radiation.

Such gases absorb radiation emitted by the Earth that would otherwise escape to space and cool the planet. Upon being absorbed, these gases re-emit a fraction of that energy back downward to the surface, keeping the planet warmer than it would otherwise be. In fact, our Earth would have an average temperature of about zero without these greenhouse gases.

The average temperature of the planet is 59 degrees, dramatically demonstrating the warming effect of these greenhouse gases.

Among the collection of greenhouse gases, carbon dioxide (CO2) is the one that has attracted the most attention with regard to global warming. This is likely because CO2 is a by-product of burning fossil fuels, the acknowledged predominant energy source for our nation’s and the world’s economy.

In the last 100 years, the accelerated use of fossil fuels has led to an increase in the CO2 concentration in the atmosphere from 300 to 400 parts per million (400 molecules of every one million are now CO2). The current concentration far exceeds anything the Earth’s atmosphere has experienced in at least the last 800,000 years.

Being a greenhouse gas, the more CO2 there is in the atmosphere, the greater the warming effect.

This basic physical fact is indisputably true. Thus, to hear the new administrator of the Environmental Protection Agency (EPA) assert that CO2 is not a “primary contributor” to global warming, as he did last week, represents a stunning display of willful ignorance.

It seems unlikely that Americans would tolerate the surgeon general of the United States suggesting that smoking does not cause cancer. Neither should we accept this recent statement by the EPA chief.

Comments Off on Is carbon dioxide a major contributor to global warming?