What is the heat index? 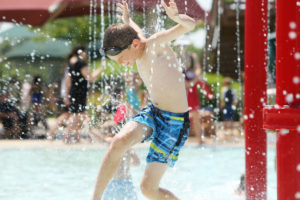 Carter Reitz, 9, of DeForest, cools off during opening day at Goodman Pool on June 10, the first 90-degree day of the season. The heat index — which can be higher or lower than the actual temperature — indicates how hot it feels. (Photo credit: Amber Arnold, State Journal)

The heat index indicates how hot it feels. It is expressed as a function of air temperature and the relative humidity.

The heat index temperature is for standing in the shade; when exposed to direct sunlight, the heat index value can be increased by up to 15 degrees.

When our bodies get hot we cool down by sweating. The sweating does not directly cool our bodies. It is the evaporation of the sweat that cools us down.

If the air has a high humidity, then the rate of evaporation is reduced. This hampers the body’s ability to maintain a nearly constant internal body temperature. This is why we are uncomfortable on hot, muggy days.

When the temperature is high but the relative humidity is low, the heat index can be less than the actual temperature. This is because cooling by evaporation of sweat is very efficient in these situations.

However, high relative humidities prevent evaporation and make it seem hotter than it really is because our bodies cannot cool down. In these cases, the heat index is greater than the actual temperature.

Summer heat waves are often associated with high heat indices and can be dangerous. For example, a heat wave in the Midwest in late July 1999 resulted in a heat index of 113 degrees in Chicago and resulted in more than 200 deaths in the Midwest. The heat wave that affected parts of the northeastern U.S., central Europe and Russia in the summer of 2010 contributed to the deaths of as many as 15,000 people in Moscow.

The National Weather Service will issue a heat advisory when the heat index is predicted to be 100 degrees. You are then advised to limit vigorous outdoor activity and drink plenty of fluids.

Comments Off on What is the heat index?