How will a warmer planet affect the severity of mid-latitude storms? 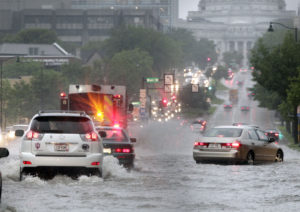 Motorists and a fire engine brave high water on East Washington Avenue between the cross streets of Blount and Livingston Streets after a strong storm dumped large amounts of rain in Madison on June 30, 2014. Storms in the warmer, moister atmosphere of the future have the potential to be more severe than otherwise similar storms today. (Photo credit: M. P. King, State Journal archives)

In an individual storm, the release of latent heat results in stronger updrafts of air (which form the precipitation) and in stronger winds associated with the storm.

One of the consequences of the gradual global warming that is currently occurring is that more water vapor finds its way into the atmosphere when the temperature rises.

As the temperature continues to warm, even more water vapor will reside in the atmosphere. Thus, storms in the warmer, moister atmosphere of the future have the potential to be more severe than otherwise similar storms today.

Though the storms themselves develop in response to their large-scale environments, their development also directly impacts those environments in ways that are not yet well understood.

Especially unknown is the way in which the more abundant moisture of a warmer atmosphere will help shape the large-scale environments of the future.

Some studies suggest that the overall number of storms may decrease but that particularly severe storms may become more frequent.

Still others suggest no increase in the number of severe storms.

One thing seems certain: As the planet continues to warm, increases in the water vapor content of the atmosphere will likely change the frequency and distribution of mid-latitude storms and our agricultural and transportation infrastructure will have to adapt to those changes.

Comments Off on How will a warmer planet affect the severity of mid-latitude storms?