How do you measure weather far above the ground?

Posted on April 4, 2016 by WeatherGuys Editor 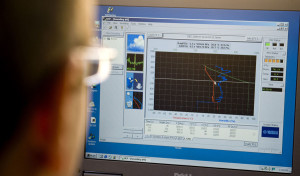 A monitor displays temperature and humidity data being sent back from a weather balloon at the Cooperative Institute of Meteorological Satellite Studies at UW-Madison. (Photo credit: Andy Manis)

Temperature and relative humidity are measured electronically; a small aneroid barometer measures pressure. Wind speed and direction are determined by tracking the position of the balloon.

When we also measure the winds, the observation is called a rawinsonde. The vertical distribution of rawinsonde observations above a location is known as a sounding.

Rawinsonde measurements are made worldwide at several hundred locations twice each day at the same time. They are only launched from land-based weather stations, which leaves much of the world unmeasured.

Because of this limitation of observations in space and time, scientists also use satellite observations to monitor the weather far above the ground. A few satellites can make global observations many times a day. Winds are determined by tracking the movement of clouds and water vapor features in the atmosphere. Temperature and humidity can be inferred under clear-sky conditions by detailed measurements in the infrared.

All these observations become critical measurements for weather forecasting. They provide a measurement of the initial state of the atmosphere at the start of the forecast.

Comments Off on How do you measure weather far above the ground?