How do we measure an official snowfall for Madison?

Posted on November 23, 2015 by WeatherGuys Editor 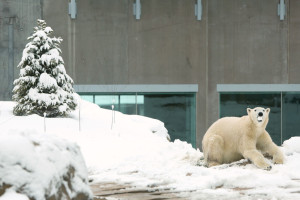 Suka the polar bear enjoys her first Wisconsin snowfall in the Arctic Passage exhibit at Vilas Zoo on Saturday. Accurate and precise measurement of snow accumulation Is a difficult task. The trick is finding a good place to measure and a firm surface upon which to set your ruler. Photo credit: Amber Arnold, Wisconsin State Journal

The trick in measuring snow consistently is simply finding a good place to measure and a firm surface upon which to set your ruler.

At official stations, a snow board (a square piece of wood 16 inches on a side and painted white) is employed.

Other surface options are wooden decks, picnic tables, and cars. Your measurement location should be 20 to 30 feet away from the house with an unobstructed view of the sky.

Sidewalks are not recommended as they tend to accelerate melting of the snow.

Grass is also suboptimal as snow tends to sit up on top of the blades of grass, while the ruler goes down to the ground.

When the wind blows and the snow drifts, accurately measuring snow accumulation is even more challenging as drifting becomes a problem.

To deal with drifting snow, measurements must be made at various places and then averaged to get what is considered a representative measurement.

The liquid equivalent of accumulated snow can be measured with the standard rain gauge — an 8-inch diameter cylinder that collects precipitation. The conversion from liquid equivalent to snow depth varies with every storm and is broadly temperature dependent.

Thus, it is really difficult to re-create a snowfall distribution from liquid equivalent observations over an area even as small as Dane County.

This would be a terrible blow to the climate record of Madison, and we sincerely hope a new agreement can be worked out between the FAA and other interested parties.

We will at least have official records through this snow season.

Comments Off on How do we measure an official snowfall for Madison?