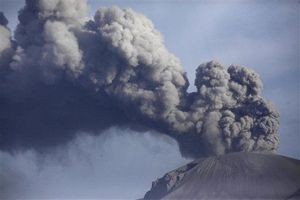 Plumes of smoke and ash billow from the Calbuco volcano, seen from Puerto Varas, Chile, on Friday. It is unclear if the plume will spread globally, and thus too early to tell what impact the eruption might have on global temperatures.

As an example, the Mount St. Helens eruption in Washington on May 18, 1980, enshrouded Spokane with its ash cloud for days. The result was lower daytime high temperatures by 5 degrees when compared to nearby cities unaffected by the ash. If the plume stays in the troposphere, say below 35,000 feet, it can stay airborne for no more than a week due to precipitation, wind and gravity.

To have a global impact on temperatures, the volcano must eject debris into the stratosphere, above about 40,000 feet. There ashes and gases in the plume can last for a couple of years and be spread over the entire globe.

The eruption can impact global temperature if it spreads globally by the winds and it contains sufficient amounts of sulfur dioxide. The sulfur dioxide can react chemically in the stratosphere to form tiny sulfuric acid droplets. These droplets, particularly if formed in the stratosphere, can reside for a few years and cause a cooling of the global surface temperatures because they reflect solar energy back to space. This was the case with Mount Pinatubo in 1991, which resulted in reducing the global mean temperature of 1992 by about 0.7 degrees. Of course, eventually the plume does disperse.

The Calbuco eruption spewed material into the stratosphere, and satellite observations indicate that the plume contains sulfur dioxide. It is unclear if the plume will spread globally, and thus a little too early to tell what the impact on global temperatures will be from this eruption. But scientists will be monitoring it.

Comments Off on Do volcanic eruptions impact climate and weather?