Posted on November 4, 2019 by WeatherGuys Editor

As we begin Winter Weather Awareness week in Wisconsin (Nov. 4-8), too many of us probably feel like grizzled veterans already.

What an end to the month of October!

It was a chilly month overall, with the average temperature ending up 1.5 degrees F below normal. This chill was especially notable in the last 10 days of the month, which averaged 6.7 degrees F below normal and were attended by a record setting 8.1 inches of snow in nearly back-to-back, but separate, events on Oct. 28-29 and Oct. 30-31.

The 8.1 inches of snow set the all-time monthly record for Madison, shattering the old record of 5.2 inches set more than a century ago in 1917.

The single storm total of 5.1 inches from the second of the two snowfalls also broke the previous record of 3.8 inches for a single storm set on Oct. 26-27, 1997. 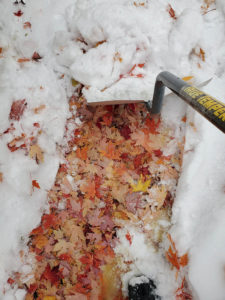 Finally, the 4 inches of snowfall on Halloween became the earliest 4 inches or greater snowfall in Madison’s history, displacing the prior record set on Nov. 3, 1951.

The fact that nearly 70 years have elapsed since such an early 4 inches of snowfall suggests that we are at the very limit of how early such an accumulation can occur in Madison.

Given that our average first inch of snow falls here on Nov. 27, we are nearly a full month ahead of schedule.

Finally, with 1 inch of snow on Oct. 28, this year contained Madison’s second-shortest interval between 1 inch or greater snowfalls on the bookends of summer (April 27 to Oct. 28).

It is tempting to wonder if this week’s early snow portends anything about the coming winter. Our strong suspicion is that the answer is no — but don’t let that dim your enthusiasm for what was a truly astounding, record-setting week.

Comments Off on Did Madison break any snowfall records last month?