Is that photo of circular lightning? 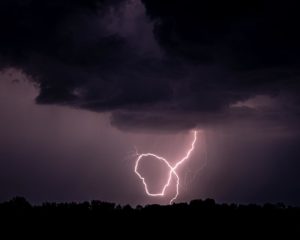 Some see the shape of Wisconsin in this looping lightning bolt that struck near Hager City Wisconsin on May 31. (Credit: Jerry Zimmer)

When we see a flash of lightning, it looks as though it forms all at once.

However, a lightning bolt is actually produced in many steps. The bolt occurs so quickly that it looks like a single brilliant flash, but high-speed photography can reveal several distinct bolts.

Lightning is a huge electrical discharge that results from the rising and sinking air motions that occur in thunderstorms. Lightning can travel from cloud to cloud, within the same cloud, or between the cloud and ground. The lightning in the accompanying photograph appears to be cloud-to-ground lightning.

Each leader heads in a direction that is independent of the previous ones. Leaders can split, forming tree-like branches resulting in a path that is not a straight line. Most lightning appears jagged because of this, but it also can take a curved path, as in this photograph.

As the negative charges approach the ground, there is an upward stream of positive charges. When the two streams meet, an initial flash occurs in the channel and electricity flows back and forth between the cloud and ground, lighting up the sky.

The ionized channel formed by the leaders is three-dimensional. So, while the bolt in the photograph looks like a 2-D outline of our state, it could be a 3-D spiral that just appears 2-D as we look along its axis. Either way, it is a fantastic and unique photograph.

Comments Off on Is that photo of circular lightning?