What is the Beaufort scale? 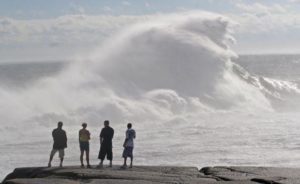 Wave watchers check out the ocean action near Peggy’s Cove, Nova Scotia, during Hurricane Bill in August 2009. Based on observations rather than measurements, the Beaufort scale is a method of estimating wind speed based on the general condition of the surface of a large body of water with respect to wind waves and swell. (Photo credit: Associated Press Archives)

The Beaufort scale is a method of estimating wind speed based on the general condition of the surface of a large body of water with respect to wind waves and swell.

It is based on observation of sea state rather than accurate wind measurements. This scale allows sailors to estimate the wind speed just by observing the state of the sea surface.

The scale has a long history, but was finalized in 1805 by Rear Admiral Sir Francis Beaufort, an Irish hydrographer in the British Royal Navy. It was officially first used during the voyage of Charles Darwin on the HMS Beagle (1832-1835).

The Beaufort scale can also be applied to conditions on land, but it is most often associated with the sea state.

The modern-day Beaufort scale consists of 13 numbers ranging from 0 to 12. A zero value on the Beaufort scale is assigned to calm winds and the water surface is smooth.

A Beaufort force 12 occurs with waves greater in height than 46 feet and the sea is completely white with foam and spray with greatly reduced visibility. Such conditions are associated with wind speeds of greater than 74 mph, which are hurricane-force winds.

The National Weather Service defines sustained wind speeds of 39 to 54 mph as a gale, and forecasters typically issue gale warnings when winds of this strength are forecast. A Beaufort force 6 is a near gale with wind speeds between 25 and 30 mph and includes white foam from breaking waves that begins to be blown in streaks along the wind direction.

Comments Off on What is the Beaufort scale?