What weather is hazardous to flying? 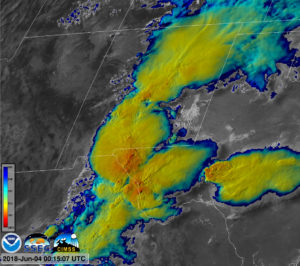 Thunderstorms create multiple hazards for aviation such as updrafts, turbulence, lightning and hail.

While there are weather hazards, flying is pretty safe.

Jet aircraft carry weather radars to detect and thus avoid the violent updrafts of storms. These updrafts have strong, turbulent winds and can carry hail.

You probably have experienced hail falling on the ground, but hail can also cause damage to planes flying at 10,000 or even 30,000 feet. On August 7, 2015, an Airbus A320 carrying 119 passengers and five crew members encountered hail, turbulence and lightning within a rapidly developing thunderstorm . It suffered cracked windshields and failed weather radar. No one was injured, although the pilot made an emergency landing at the Denver airport and the nose of the plane suffered hail damage.

Turbulence is also a danger to high-flying jets. Turbulence generated by a thunderstorm can cause the aircraft to violently “shake” even if only flying close to a storm. Clear-air turbulence, or CAT, is the turbulent movement of air in the absence of any visual clues, such as clouds.

Lightning can strike a plane, but generally doesn’t do damage as the bolt enters the aircraft extremities, such as the nose, tail or wing tips.

Icing is particularly dangerous to planes. When a plane is flying in temperatures below freezing while inside a cloud, very cold liquid water drops freeze onto the aircraft as soon as they strike the plane. Ice on the wings can disrupt the lift of the plane causing it to lose altitude. De-icing a plane before take-off prevents build up of ice on the plane.

The downdrafts of a storm can be very dangerous to aircraft on take off or landing. A downdraft can result in rapid wind shift from a tail wind to a head wind causing the aircraft to rapidly lose altitude. Fortunately, airports are equipped with instruments that can detect hazardous conditions and send warnings that keep the planes from encountering these dangerous conditions.

Comments Off on What weather is hazardous to flying?