How severe was our just-completed meteorological winter? 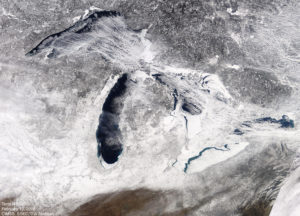 Employing data from the last 70 winter seasons (December, January and February) we have been examining the extent of air colder than 23 degrees over the Northern Hemisphere. This year’s winter season was the 23rd warmest of the last 70. Not particularly impressive considering that just three years ago we had the very warmest winter season in seven decades.

Using the same data, we have recently been attempting to develop a reasonable measure of the duration of the winter over a region encompassing the Great Lakes.

In the older data set, the 90 percent day is Dec. 16 while the 10 percent day is March 3. Thus, one could make an argument that, on average, our winter extended from Dec. 16 to March 3 in that earlier period.

In the more recent period, the 90 percent-10 percent interval extends from Dec. 30 to Feb. 18 — nearly four weeks shorter than the prior period. This preliminary result suggests that as the Earth continues to warm, not only is winter less extreme, but it may also be substantially shorter.

Comments Off on How severe was our just-completed meteorological winter?