Did someone predict the recent Wisconsin tornado? 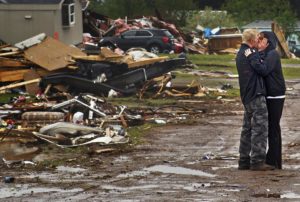 Ron Bloomberg, who witnessed victim and neighbor Eric Gavin’s body being recovered, embraces his girlfriend as he returns to his home in Chetek, Wis., after a tornado flattened a trailer park and nearby trees. (Richard Tsong-Taatarii/Star Tribune via AP)

We cannot yet forecast tornado occurrence with any accuracy. One problem is the small size of a tornado, which is a narrow column of strong winds that rotate around a center of low pressure.

Over the last 60 years, forecasts of the development of large-scale low-pressure systems, which often organize the ingredients needed to form a tornado, have steadily improved. Because of these advances, meteorologists are better able to predict those conditions a few days in advance, enabling forecasters to identify counties where there is a threat of severe weather sometimes as many as three days in advance. Two days in advance of the recent EF-2 tornado (later upgraded to EF-3) that hit southeastern Polk County, the National Weather Service’s Storm Prediction Center’s convective outlook issued a slight-risk for the area.

For a thunderstorm to produce a tornado requires warm humid air near the surface with cold dry air above. These conditions make the atmosphere very unstable, in the sense that once air near the ground is forced upward, it ascends freely and quickly (like a helium balloon), cools as it expands and forms a storm. Severe thunderstorm conditions also include a layer of hot, dry air between the warm, humid air near the ground and the cool dry air aloft. This hot layer acts as a lid that allows the sun to further heat the warm, humid air — making the atmosphere even more unstable. In the central U.S., such air is created over the plateau of Mexico and sent northeastward over the Great Plains.

To form a tornado, the host thunderstorm must also rotate. This happens in a storm when wind at the ground is moving in a different direction and speed than the air above. The change in wind speed and direction with height is known as wind shear. Both wind shear and atmospheric instability are needed for tornado formation.

Recent advanced models have been able to simulate development of a tornado, a first step to better predictions. Advances in radar technologies have helped to identify storms that are producing a tornado, or about to produce one. Based on observations from such advanced technologies, the Storm Predication Center (SPC) issued a warning about one hour before the Polk County tornado, and the NWS issued a tornado warning about 10 minutes before the first sighting of a funnel cloud.

Comments Off on Did someone predict the recent Wisconsin tornado?