Is there a “State Tournament Snowstorm” legacy? 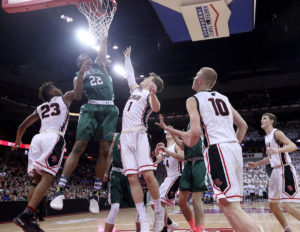 WIAA Division 1 state tournament semifinal at the Kohl Center in 2017. Only four times in the last 60 years has the tournament been free of snow. (Photo credit: John Hart, State Journal)

A persistent anecdotal piece of weather lore around Madison is that the WIAA’s boys state basketball tournament is always accompanied by a snowstorm.
With the help of Edward Hopkins at the State Climatologist’s Office, we looked into this perception with cold, hard data.

Hopkins provided the daily snowfall totals for every March since 1950. We identified the days on which the boys’ tournament was played in Madison (we chose the boys tournament only because the record was longer).

The results are very interesting. It turns out that only four times in the past 60 years have the approximately five-day-long tournament been free of snow — that is, only about 6 percent of the time does no snow at all fall during the duration of the tournament.

Most of the remaining 63 “snowy” tournaments were characterized by days on which at least a “trace” amount fell (not enough to measure, but enough to say it snowed). A few had days on which 1 or 2 inches fell.

Only seven tournaments (10.4 percent) had a single day on which more than 3 inches of snow fell.

Such conditions are roughly equivalent to those necessary for issuance of a snow advisory by the National Weather Service.

Thus, though snow is almost always in the air during tournament time (this year there were traces of snow on Thursday and Friday), it appears that less than one in eight tournaments have actually been accompanied by a snowstorm.

Comments Off on Is there a “State Tournament Snowstorm” legacy?