How did this winter compare to others?

Posted on March 7, 2017 by WeatherGuys Editor 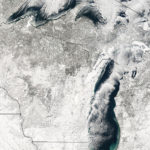 Now that the traditional winter season (December, January, February) is over, we can consider how this season stacked up against the preceding 69 winters in terms of its hemispheric intensity.

One way to measure this intensity is to consider the areal extent of air colder than 23 degrees at about one mile above the ground. For several years now, at UW-Madison we have been calculating this areal extent each day and, using those daily values, can calculate a seasonal average.

This year the season ended up being the 13th warmest in the last 69 cold seasons.

Evidence like this makes two points very clear. First, the evidence supports the scientific consensus that the planet is warming in a systematic way and that this warming is most likely a result of changes in the chemical composition of the atmosphere brought on by industrialization.

Second, there has been no “pause” in the warming trend the Earth has been experiencing in the last 100 years as is suggested by global warming skeptics.

We are currently examining the intensity of winters on a more regional basis using the same metric and will report on those results soon.

Comments Off on How did this winter compare to others?