Why do thunderstorms scare dogs?

Posted on July 5, 2016 by WeatherGuys Editor 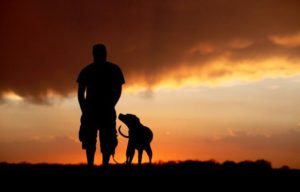 As an impending storm adds drama to the sky, Grant Bunchkowski of Oconomowoc and his dog, Champagne, take in the view near the city’s Lac LaBelle in May 2013. Some dogs, like some humans, seem to have a great fear of thunderstorms. An article in “Psychology Today” suggests that some dogs may be seeking an electrical ground during a storm to avoid electrostatic shock. (Photo credit: John Hart, State Journal archives)

Some dogs seem to have a great fear of thunderstorms, as do some humans.

Their fear can drive them through closed doors or windows, or send them cowering to an isolated spot in the house.

While it is unknown why some dogs become desperate to escape the storm, a few studies and personal experiences point to possible reasons for this fear.

Thunder, the loud noise that accompanies lightning, gives this nimbostratus cloud the name thunderstorm. Some dogs don’t like loud sounds, whether from a thunderclap or fireworks.

Static electricity may be another reason. An article in “Psychology Today” suggests that some dogs’ behavior during a storm means they are seeking an electrical ground to avoid electrostatic shock. Those dogs retreat to a particular location in the home during a storm, like the bathroom, bathtub or lean against a radiator.

Thunderstorms are associated with electric field changes. A bolt of lightning is an electrical discharge much like a shock you get when reaching to grab a metal door knob after walking on a rug, just much more energetic.

“St. Elmo’s fire” is evidence of this static electricity associated with thunderstorms. The masts of tall ships may acquire a blue or violet glow in the vicinity of thunderstorms. Pipes in homes and other metal objects have also displayed St. Elmo’s fire. The electric field around the mast, or pipes, causes ionization of the air molecules which generates a faint blue glow that is visible in low-light conditions.

A large dog with thick fur walking around on insulating foot pads is an ideal object for accumulating static charge, which will discharge.

The dog becomes conditioned to expect random shocks during the storm, probably not something anyone wants to endure.

Comments Off on Why do thunderstorms scare dogs?